Yes, dogs can eat tomatoes.  Tomatoes are a healthy source of vitamin C and many dogs love them.  If you grow tomatoes in your garden, your dog may eat them right off the vine.

Tomatoes are considered to be mildly anti-inflammatory.  They are 79 percent carbohydrates, 9 percent fats, and 12 percent proteins.

Who can eat tomatoes? 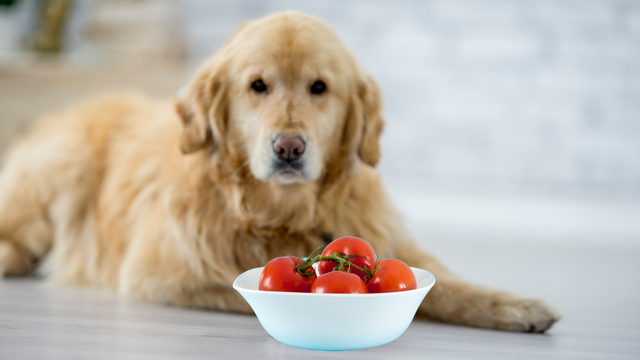 It is fine to give your dog tomatoes in most cases. However, it has been suggested that tomatoes are not good for dogs with arthritis or joint problems so it is probably a good idea to avoid giving them to your dog if he has one of these problems.  Tomatoes are members of the nightshade family, along with eggplant and potatoes, and you should not give these foods to dogs that have arthritis or joint problems as they can worsen their condition.

Tomatoes also contain the substances atropine and tomatine in small amounts. They are mostly present in the green parts of the tomato plant, such as the leaves and vines, or in the green, unripened tomato.  For this reason, most people don’t eat the green parts, though fried green tomatoes are a specialty in some places.  Humans don’t seem to be very affected by these chemicals in the small amounts found in tomatoes.  However, dogs do seem to be sensitive to these chemicals in tomatoes.  So, don’t allow your dog to eat the leaves or vines from the tomato plant, or give him any green tomatoes.  If you are going to grow tomato plants, it’s a good idea to grow them where your dog can’t reach them.  Even if they don’t make your dog sick, that will keep your dog from eating them and getting all of your tomatoes.

How to give your dog tomatoes

You can give your dog some slices of red, ripened tomatoes, or you can give your dog a little tomato sauce if you are making some for yourself.  If you cook your dog’s meals then there are some recipes which include tomatoes and which even have pasta and tomatoes.  You can make a spaghetti dinner for your dog, with meat sauce.  Just omit the onions as they can be bad for dogs.

Many dogs do love ripened tomatoes so if you grow them, you may have a hard time keeping your dog out of your garden.  Lots of dogs eat them straight from the vine without any problems.  If your dog does eat any green tomatoes or parts of the plant, watch him and call your vet.  He may not have any problems from eating the green tomatoes or plant parts, but you should be cautious.

It is fine to give your dog some red, ripened tomatoes occasionally or to add some to his meals, unless he has arthritis or joint problems.  Do not give your dog green tomatoes or allow him to eat the green parts from the tomato plant.